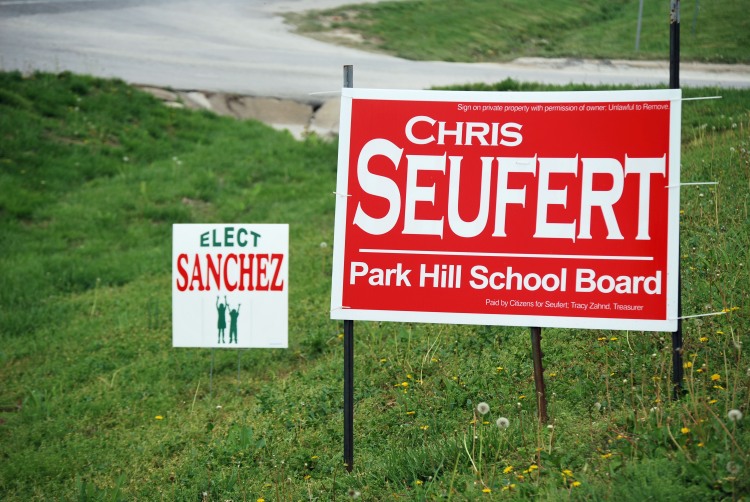 Now that the school board elections are last week’s news, let’s talk about signs.

During the campaigns, I was corresponding with a number of candidates, and one told me, “It is a bit of a challenge to run for school board.  There is no press coverage.  Forums are few and far between.  Some neighborhoods do not allow signs.  It is a real challenge to get the word out.”

Woah. Back up. Some neighborhoods do not allow political signs? My husband and I chose to live in a neighborhood that does not have a homeowners’ association, so the idea that some might think of signs more in terms of clutter than political speech was a new one for me.

To tell you the truth, the candidate who told me about the trouble with posting signs wasn’t entirely certain the neighborhoods were actually prohibiting them.

“I have also entertained the idea that maybe that was the folks way of politely letting me know they didn’t want a sign in their yard. Not everyone is a ‘sign in your yard’ person.”

But a quick check confirmed that at least two of the three neighborhoods in question did indeed prohibit signs. And I’m sure that many people who sign homeowners’ association covenants don’t even think that they might be signing away their right to political speech until campaigning season and the association tells them to take their signs down. Most people probably don’t read the fine print of what they’re signing at all.

According to the local chapter of the American Civil Liberties Union (ACLU), it’s perfectly legal for homeowners’ associations to prohibit sign posting. It’s only a legal and Constitutional problem if it’s the government that does the prohibiting.

ACLU Political Director Doug Bonney, however, told me about a bill pending in the Missouri House of Representatives. St. Charles County Republican Kurt Bahr, who introduced House Bill 1380, would like to make it legal for property owners who belong to homeowners’ associations to place political signs in their yards during campaign season. Unfortunately, however, this bill doesn’t seem to be going anywhere and is not scheduled for any sort of debate or hearing in the House of Representatives.

Across the state line, Kansas already has a law allowing residents of homeowners associations to display political signs. There is a size limitation. In addition to limiting size, the pending Missouri legislation seeks to limit the number of signs displayed in any one yard. Bahr’s bill also would prohibit political signs with “balloons or lights,” any sign that “threatens the public health or safety” with “language, graphics or any display that would be offensive to the ordinary person” or that is “accompanied by music or other sounds or by streamers or is otherwise distracting to motorists.”

It seems like there could be some sort of reasonable compromise here that would allow all Missouri residents to support candidates. Directors of homeowners’ associations need to ask themselves what is more important: prohibiting signs or supporting campaigns of people who will be in charge of schools that add so much value to the neighborhoods. It seems like it would be in the associations’ best interests not only to allow signs but to place some out themselves. No balloons or lights or course language or dirty pictures or loud music or streamers, of course.

JoLynne is a journalist and educator. She holds a bachelor's degree in journalism from the University of Kansas and a Master of Arts in Teaching from Park University and is certified to teach high school journalism and English. Former employment includes work for Cable News Network and the University of Missouri-Kansas City in addition to freelancing for clients such as the Kansas City Star and The Pitch.
View all posts by jwmartinez »
« Phyllis Balagna Receives One-Year Appointment to Lee’s Summit Board of Education
Gardner Edgerton School Board to Meet Monday Evening »