Occupy Wichita Protesters Speak Out on School Funding & Other Issues, One Arrested 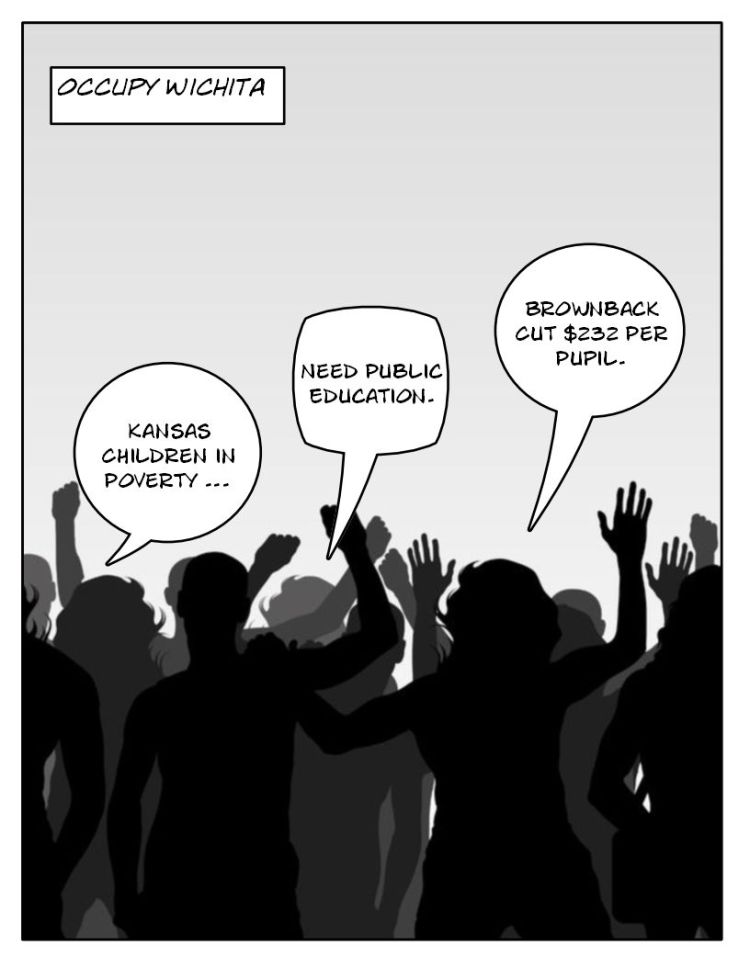 Occupy Wichita disrupted a town hall meeting sponsored by Kansas Gov. Sam Brownback yesterday. Among other issues, protesters spoke out on behalf of public education, criticizing the governor for slashing school funding. Police arrested one protester, who was later released.

Reducing childhood poverty was the topic of the town hall meeting, and the speaker was Robert Rector, a senior research fellow with the conservative Heritage Foundation. According to Rector, the way to reduce the number of children living in poverty is to increase the number of married parents. He delivered a similar talk earlier this week in Kansas City, Kan., and another presentation is scheduled for this afternoon in Garden City. Kansas’ Department of Social and Rehabilitation Services is sponsoring Rectors’ speeches.

During the town hall meeting in Wichita, protesters stood up and used the Occupy Movement’s people’s microphone — in which one person speaks and the others repeat, amplifying the message — to speak out against various state actions, including funding cuts for public education. Although the audio is largely intelligible, you can view a video of yesterday’s protest on YouTube:

Following the protest, Wichita police arrested one protester, Doris Gent. You can view a video of her arrest on YouTube, as well:

A Kansas Health Institute reporter, Lori Lineberger, has posted a photo of the arrest: http://www.khi.org/photos/2011/nov/16/1152/

Wichita police department records show that they arrested Gent yesterday at 3:40 p.m. and charged her with obstruction of justice and resisting arrest.

On her Facebook page, Gent says she is not guilty of either charge and plans to seek legal counsel.

The Wichita Eagle-Beacon carried a story about yesterday’s protest: http://tinyurl.com/7raavwb

For more information on The Heritage Foundation, click here: http://tinyurl.com/83ofy94

One thought on “Occupy Wichita Protesters Speak Out on School Funding & Other Issues, One Arrested”