Hundreds of Prairie Creek Elementary students were shivering Monday morning, but their yellow plastic hard hats brightened an otherwise damp, gray day. They were gathered for the groundbreaking of a new addition to their school.

According to district administrators, the addition is needed to eliminate overcrowding. The current school has room for only 242 of those students who were shivering at the groundbreaking. The fact that 260 students are squeezed into that small space probably generated enough body heat to warm everyone quickly once they got back inside.

Prairie Creek’s addition will cost about $5.25 million and is part of a $39 million bond issue that voters approved last summer. When construction is complete next fall, there will be room to grow with classroom space for 528.

Generating body heat isn’t the only form of alternative energy in the Spring Hill School District these days. Part of the bond funds are dedicated to retrofitting the HVAC systems at Spring Hill Middle and Elementary schools with ground source heat pumps. Earlier this month, Sunbelt Environmental Services dug two test wells and ran tests on the system. The Spring Hill School Board is expecting a progress report on this project in November.

Geothermal systems cost more to install than conventional HVAC but require less energy to run and so may pay for themselves in about five years. Money saved on utility costs — which is one of the district’s largest budget items — may help Spring Hill weather the economic downturn. 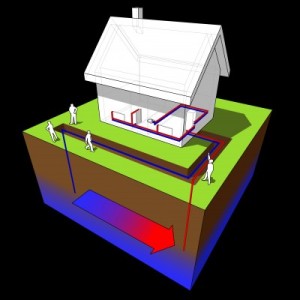 A geothermal heat pump draws warmth from the earth in winter and acts as a heat sink in summer. Art Credit: 123rf stock image

Ground source heat pumps operate by using the earth as a heat source during cold weather and a heat sink during warm weather. Pipes circulate throughout the schools and underground, where the earth maintains a nearly constant temperature of about 55 degrees. A pump transfers heat from the earth to the classrooms in winter or back to the earth in the summer.

Money for the heat pump retrofit will come from the $8 million in bond funds dedicated to deferred maintenance.

In other bond issue news, the new elementary school — slated to open in 2013 — now has a name. A limited liability company with a large development in the Spring Hill district has donated 14.5 acres of land for the school in exchange for naming rights. Located within the boundaries of The Estates of Wolf Creek will be the new Wolf Creek Elementary School.

Spring Hill is not saving any money by accepting the land donation, because plans had been to construct the new school on land the district already owned. However, The Estates of Wolf Creek will be gaining a valuable amenity for their subdivision. Even before the land donation, the development prominently advertised its location next to Spring Hill’s middle school and high school in an “outstanding” district. Wolf Creek is competing in a business hit hard by the economic downturn. Residential building permits in the City of Spring Hill have declined from 153 valued at more than $15 million a decade ago to 29 valued at about $1.5 million last year.

Last summer, when the Board of Education voted unanimously to accept the land gift and move the location of the planned elementary, they considered a Site Evaluation Matrix. A positive factor in moving the site was removing the elementary school from high school automobile and pedestrian traffic. However, the new site will require a final plat, which was not required by the original site. The new site will also require a traffic study projected to cost about $10-12,000, as well as the building of more streets and installation of utility infrastructure than were required by the original site.

JE Dunn is the contractor on the Spring Hill bond projects, and the DLR Group is the architectural firm.

JoLynne is a journalist and educator. She holds a bachelor's degree in journalism from the University of Kansas and a Master of Arts in Teaching from Park University and is certified to teach high school journalism and English. Former employment includes work for Cable News Network and the University of Missouri-Kansas City in addition to freelancing for clients such as the Kansas City Star and The Pitch.
View all posts by jwmartinez »
« Class Size & Football Stadium at Issue in Gardner Edgerton Bond Vote
Two Local Districts Helping Kansas Test New Way to Evaluate Educators »